Washington, D.C. – A new American Institutes for Research (AIR) research brief identifies the most gender imbalanced academic fields in which Ph.D.'s are awarded. In the STEM field, animal sciences and mathematics had far more men earning doctorates while forestry, information science/studies and three categories of engineering had more women. The findings come from one of two new research briefs on STEM Ph.D.'s AIR released today. The other paper looks at graduate school funding.

In Exploring Gender Imbalance Among STEM Doctoral Degree Recipients, AIR researchers determined “overrepresentation” by whether the gender breakdown among doctoral degree recipients is more skewed than the gender makeup among bachelor’s degree recipients in a given field. The researchers note this is a more reliable gauge of gender imbalance at the doctoral level because it accounts for differences in preparation and interest in academic fields.

“There is a considerable loss of female candidates between the bachelor’s and doctoral degrees,” senior researcher and co-author Andrew Gillen said. “If we want gender equity at the doctoral level, efforts need to be made earlier in students’ academic pathways and sustained throughout their doctoral education.”

Who Pays for the Doctorate? A Tale of Two Ph.D.'s is an extension of a previous paper on the debt burden of those with a science doctorate. The new report focuses on how debt is tied to graduate school funding patterns by looking at two types of aid: institutional funding (assistantships, fellowships and grants) and external funding (savings, earnings and employer reimbursement).

About 90 percent of STEM Ph.D. recipients funded their graduate education through primarily institutional sources. In contrast, 65 percent of those with a doctorate in the social, behavioral and economic sciences did. However, white and Asian students were more likely than underrepresented minorities (blacks and Hispanics) to receive full tuition waivers.

These research briefs are the latest in a series that explores issues related to broadening participation in STEM graduate education. Previous work includes The Role of Historically Black Colleges and Universities as Pathway Providers: Institutional Pathways to the STEM Ph.D. Among Black Students and Leaving STEM: STEM Ph.D. Holders in Non-STEM Careers.

Who Pays for the Doctorate? A Tale of Two PhDs

The extreme levels of debt accrued by students pursuing postsecondary degrees has been identified as one of the nation’s most worrisome educational issues. About 90 percent of STEM Ph.D. recipients funded their graduate education through primarily institutional sources. In contrast, 65 percent of those with a doctorate in the social, behavioral and economic sciences did.
24 Sep 2014
Brief

The Role of Historically Black Colleges and Universities as Pathway Providers: Institutional Pathways to the STEM Ph.D. Among Black Students

The participation of diverse groups of individuals in STEM academic and workforce communities is severely lacking, particularly in the context of the nation’s shifting demographic landscape. This brief examines black STEM Ph.D. recipients’ institutional pathways to the doctorate and provides insight into who among black students are earning STEM doctoral degrees, whether black students are earning these degrees at historically black colleges and universities or other types of institutions, and the extent to which they being supported financially in their degree pursuits. 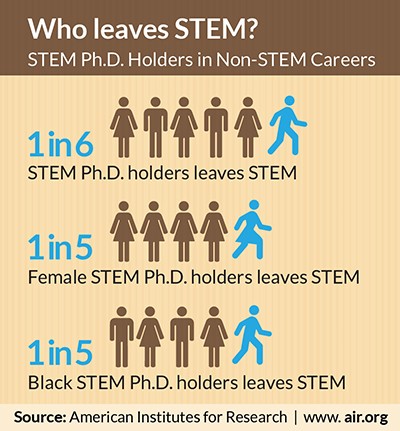 During the last few decades, national-, state-, and institutional-level initiatives have been implemented to build and expand the STEM workforce by recruiting and retaining people who have been traditionally underrepresented in STEM (science, technology, engineering, and mathematics) fields in higher education. The underlying idea is that individuals who earn STEM degrees aspire to careers in STEM, but to what degree is this true?
6 May 2013
News Release

African Americans and Hispanics are more likely to go into debt while earning a doctorate in the sciences than their white and Asian counterparts, according to a new issue brief by experts at the American Institutes for Research (AIR). The disparity is largest for African Americans, who are twice as likely to accrue more than $30,000 in debt.