Washington, D.C. – Students at high schools focusing on deeper learning had higher scores on standardized tests in mathematics and English, and higher graduation rates than their peers, according to a study by the American Institutes for Research (AIR).

In conducting the Study of Deeper Learning: Opportunities and Outcomes, funded by the William and Flora Hewlett Foundation, AIR researchers found positive effects on students from a wide range of deeper learning approaches.

Deeper learning involves using strategies and resources aimed at helping students master core academic content – like reading, mathematics and science – while developing the ability to think critically and to work effectively with others. AIR’s research team examined a set of selected high schools associated with 10 established deeper learning networks. The schools were identified as being moderate or high implementers of deeper learning practices.

The study included a survey of 1,762 students in 22 schools in California and New York. The schools serve a diverse and traditionally underserved group of students, including substantial populations of students living in poverty and, in some cases, large populations of English language learners.

For more information about the study, visit http://www.air.org. 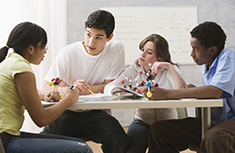 What do today’s students really need to learn in order to succeed, not only in the classroom but also later on in college, careers, and as engaged citizens? What role can deeper learning—“a set of competencies students must master in order to develop a keen understanding of academic content and apply their knowledge to problems in the classroom and on the job”—play?
Share