Associate’s Degrees and Certificates Can Be a Path to the Middle-Class, New Report on Colorado Graduates Finds

Washington, D.C. – The number of subbaccalaureate credentials granted in Colorado is rapidly growing with some graduates earning as much as, or even more than, those with bachelor’s degrees. These findings are from a new analysis looking at 10 years of data on graduates of all public and many private institutions in Colorado who work in the state.

Education Pays in Colorado: Earnings One, Five and Ten Years After College was written by Mark Schneider, president of College Measures and a vice president at the American Institutes for Research (AIR). It expands on previous work that examined the first-year earnings of associate and bachelor degree holders employed in Colorado. These reports come from a partnership between the State of Colorado and College Measures, a joint venture of AIR and Matrix Knowledge Group.

“The postsecondary education system in Colorado offers many pathways that can help students secure good jobs with middle-class earnings,” Dr. Schneider said. “And they’re not only doing it with bachelor’s degrees. Those with an associate’s of applied science, for example, make more than $40,000 in median earnings a year after college, or about $10,000 more than the state median per capita income.” 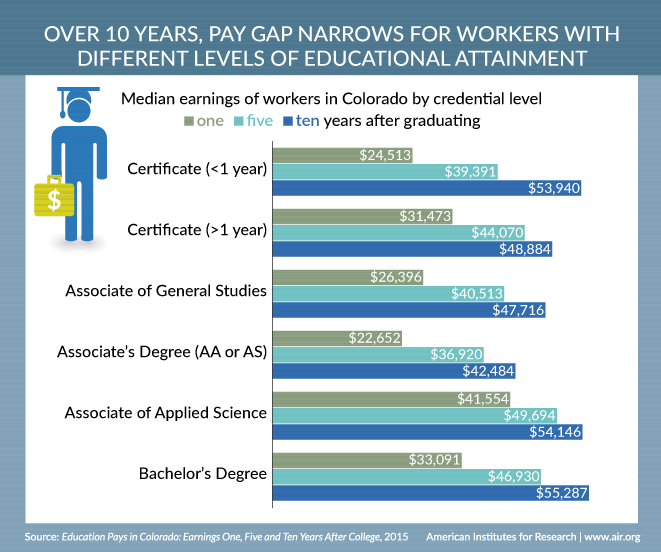 Key findings from each credential level include:

Short-term certificates (less than one year to complete)

Longer term certificates (one to two years to complete)

Education Pays in Colorado: Earnings 1, 5, and 10 Years After College

Postsecondary education delivers many benefits to students who attend America’s colleges and universities and to society in general. But students should explore all of their options, including shorter and less expensive pathways (e.g., subbaccalaureate credentials) to good jobs. Among other findings, this report reveals that many subbaccalaureate credentials can lead to middle-class earnings—sometimes exceeding the earnings of graduates with bachelor’s degrees.
13 Mar 2013
Report

Higher Education Pays: The Initial Earnings of Graduates from Colorado’s Colleges and Universities Working in Colorado

This report show that in Colorado, higher education pays off for those who earn postsecondary credentials. Graduates with postsecondary degrees working in Colorado after graduation can average as much as $20,000 more than high school graduates.
Share